The Neurobiological Factors Relating to Addiction to Drugs and Alcohol.

This is an overview of how the brain works in general, as well as how and where drugs like heroin and cocaine act in the brain. The concept of "reward" is a quality shared by many addictive substances.

The Spinal Cord and the Brain

Both the brain and the spinal cord make up the central nervous system. A brain is a functioning unit composed of billions of nerve cells (neurons) that communicate with one another via electrical and chemical impulses.

Regions of the brain and neural circuits 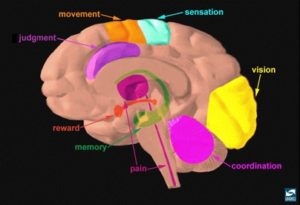 Specific functions are controlled by specific areas of the brain. The sensory (blue), motor (orange), and visual (yellow) cortex each have different functions. The cerebellum (pink) is responsible for coordination, whereas the hippocampus (green) is responsible for memory. To send and integrate information, nerve cells or neurons use routes to connect one location to another. Neurons can communicate across short or long distances. For instance, draw attention to the reward system (deep orange). When a person receives positive reinforcement for particular activities, this circuit is triggered ("reward"). When a person consumes an addictive drug, this occurs. The thalamus (magenta) is a structure that receives and transmits information about pain from the body (magenta line within the spinal cord). 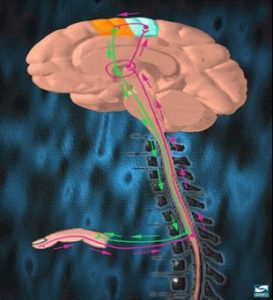 This is a long pathway in which neurons in the brain and spinal cord form connections. When a person slams a door on his or her finger. First, nerve endings in the finger (sensory neurons) detect the injury and send impulses to the spinal cord through axons (magenta pathway). The neurons that extend up to the brain create a synapse with the arriving axons. The neurons that move up the spinal cord create synapses with neurons in the thalamus, a midbrain structure (magenta circle). The thalamus organizes this information and delivers it to the sensory cortex (blue), which interprets it as pain and sends information back to the thalamus via the neighboring motor cortex (orange) (green pathway). The thalamus organizes this data and sends signals down the spinal cord, instructing motor neurons in the finger and other areas of the body to react to the pain (e.g., shaking the finger or shouting "ouch!").

Neurotransmitters are released, they attach to their receptors, and fresh impulses are created in the bottom cell when impulses reach the terminal.

Food, water, sex, and nurturing are all-natural rewards that allow an organism to feel pleasure while eating, drinking, procreating, and being tended. These pleasant sentiments encourage the activity, making it more likely to be repeated. Each of these activities is necessary for the species' existence. In the brain, a circuit is important for reinforcing rewarding actions.

Each natural remuneration is necessary for our species' survival. Animals and people will continue to engage in rewarding activities until the reward is no longer available. Natural and manufactured rewards, such as addictive medicines, both engage a section of the brain. The reward system is the name for this portion of the brain. With the help of rats, neuroscientists were able to pinpoint the particular areas of the brain involved. Scientists have constructed a map of the brain based on knowledge gained from working with rats, and have pinpointed the structures and pathways that are active when an addictive medication is taken freely. 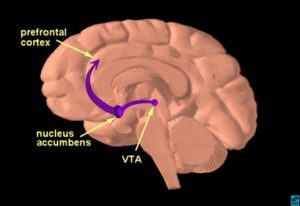 The primary structures of the reward system are highlighted, including the ventral tegmental area (VTA), the nucleus accumbens (nuc. acc.), and the prefrontal cortex. The pathway that connects these entities is also noted. The VTA sends information to the nucleus accumbens, which subsequently sends it to the prefrontal cortex. Reiterate that a rewarding stimulus activates this pathway. However, the reward does not activate simply one pathway; other structures are also involved.

Cocaine gets swiftly to the brain when it is smoked or snorted. Although it affects many sections of the brain, it focuses on the VTA, the nucleus accumbens, and the caudate nucleus in particular. Cocaine is concentrated primarily in reward zones. Other effects, such as increased stereotypic behaviors, may be explained by cocaine buildup in other locations, such as the caudate nucleus (pacing, nail-biting, scratching, etc..) It concentrates in brain locations with a lot of dopamine connections.

Cocaine binds to uptake pumps, preventing them from withdrawing dopamine from synapses. More dopamine is produced in the synapse, and more dopamine receptors are activated as a result. Increased dopamine receptor activation leads to increased cAMP synthesis within the post-synaptic cell. This induces several internal alterations in the cell, resulting in aberrant firing patterns.

Increased impulses leave the nucleus accumbens to activate the reward system as a result of cocaine's effects in the nucleus accumbens. The body becomes reliant on cocaine to maintain pleasurable experiences as long as it is used. Positive reinforcement or enjoyable sentiments of natural rewards are no longer available to the person (food, water, sex).

While performing a Positron emission tomography (PET) scan on a cocaine user, keep in mind that cocaine has various effects in the brain than activating reward. 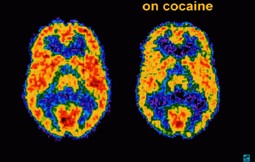 The PET scan reveals how the brain utilizes glucose; glucose provides energy to each neuron, allowing it to function. The scans demonstrate how cocaine affects the brain's ability to utilize glucose or metabolic activity. The scan on the left is from a healthy, awake person. The highest amount of glucose utilization is shown by the red color (yellow represents less utilization and blue shows the least). The right scan was taken from a cocaine addict who was high on the drug. It demonstrates that the brain can't use glucose as efficiently as the rest of the body - note the reduction of red in comparison to the left scan. The metabolic activity of numerous parts of the brain has decreased. Many brain activities are disrupted as the neurons' ability to utilize glucose (energy) continues to deteriorate.

When heroin or morphine is injected, it travels fast to the brain as well. Highlighted are the VTA, nucleus accumbens, caudate nucleus, and thalamus. The opioids bind to opioid receptors, which are concentrated in reward system locations. Opioids' ability to cause analgesia is aided by their action in the thalamus.

The nucleus accumbens is used by opioids to activate the reward system. Because more than two neurons are involved, the action is a little more sophisticated than cocaine's. The dopamine terminal, another terminal holding a different neurotransmitter, and the post-synaptic cell containing dopamine receptors all play a role in the opioid activity. When opioids attach to opioid receptors on a nearby terminal, a signal is sent to the dopamine terminal, telling it to release more dopamine.

This has an impact on the post-synaptic cell's function. Because more dopamine is released, dopamine receptors are activated more, similar to the impact of cocaine. This leads to an increase in cAMP production inside the post-synaptic cell, which disrupts the neuron's regular function. Increased impulses leave the nucleus accumbens to activate the reward system as a result of opioid effects in the nucleus accumbens. Continued use of opioids, like cocaine, causes the body to become reliant on the presence of the drug to maintain rewarding experiences and other normal actions. Without the medicine, the person is unable to sense the benefits of natural rewards (food, water, sex) and is unable to operate regularly.

THC (magenta), the active element in marijuana, goes swiftly to the brain when smoked.

THC binds to cannabinoid receptors found in the reward system as well as other regions. THC's propensity to interfere with memory is explained by its effects in the hippocampus, while its ability to produce incoordination and loss of balance is explained by its actions in the cerebellum. The body generates and responds to its own cannabinoid molecules, known as endocannabinoids, in the same way, that it produces and responds to its own opioids (endorphins). THC interacts with the endocannabinoid system in the body.

There has been a lot of research into the endocannabinoid system in the recent few decades, not only because of the popularity of marijuana as a recreational drug but also because of the rising usage of marijuana for medical purposes. THC is supposed to work in the same way that opioids do. Use the nucleus accumbens as an example once more. The dopamine terminal, another terminal holding a different neurotransmitter, and the post-synaptic cell containing dopamine receptors are all likely to be involved. THC binds to THC receptors (magenta) on the adjacent terminal, inhibiting the GABA signal and causing the dopamine terminal to release more dopamine.

This has an impact on the post-synaptic cell's function. Dopamine receptors are activated more as a result of the enhanced dopamine release. Because it induces a rise in cAMP production inside the post-synaptic cell, it changes the neuron's usual activity, resulting in THC activities in the nucleus accumbens. The reward system is activated by increased impulses leaving the nucleus accumbens. Scientists are yet unsure how continuous marijuana usage affects the reward system. Neuroscientists are conducting extensive research in this area.

Finally, all three medications attach to the nucleus accumbens, which is one of the reward centers. Each medication boosts the reward pathway's activity by increasing dopamine transmission. This occurs despite the fact that the medications have different methods of action. Since of the way our brains are wired, and because these medicines trigger a specific reward circuit in the brain, they can be abused.

Download the Powerpoint file The Brain & the Actions of Cocaine, Opioids, and Marijuana for more information on Neurobiological Factors Relating to Drug and Alcohol Addiction (PPT, 4.1MB).

Our sober house directory is a fantastic resource for finding homes, but ultimately it is up to you to discover the ideal one for you. While accreditation and a professional outer look are a wonderful place to start, you should do further research before making a decision. Don't be hesitant to ask any questions you may have! While many homes provide excellent sober living, we have a particular fondness for Vanderburgh House, which we attribute to the fact that they assisted in the creation of this directory.

If you've ever wondered what it's like to run a sober house, we recommend you to contact Vanderburgh Communities, which was the first organization to give sober living charters in the United States. They can answer any questions you might have. Maintain your composure and take things one day at a time!